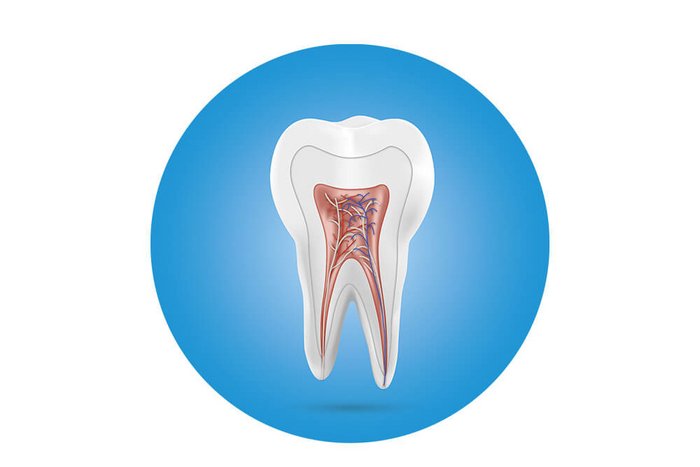 Although they fulfill different functions, all 32 of our teeth are constructed in the same way. The milk teeth, molars or incisors – every single one of our teeth has three areas: the crown, neck and root. These consist of different layers and materials – from enamel, the hardest substance in the human body, to the bone-like dentine, all the way down to the sensitive pulp in the centre of the tooth.

In this article you will discover the structure of a human tooth, find out which areas need special protection during your daily oral hygiene routine and what medical approaches are available to restore your teeth. 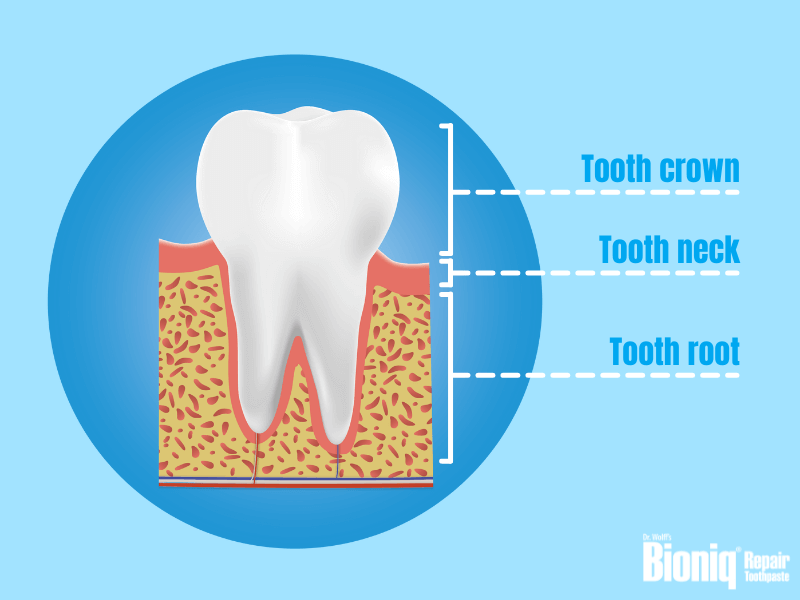 Looking at a tooth from top to bottom, it can be roughly divided into three areas: the crown, the neck and the root:

The visible part of the tooth is the crown. Its main function is to chew our food. The tapered crown of the incisor teeth is perfect for biting. In contrast, the masticatory surfaces of the molars grind up the food so that it can be swallowed easily.

The neck of the tooth lies between the crown and the root. A healthy tooth neck is covered by the gums and is therefore well protected from external influences. However, when tooth necks are exposed due to receding gums, they often cause pain and react with sensitivity to cold and heat and to sweet or sour foods.

The root is completely covered by the gums. As it is firmly anchored in the jawbone, it holds the teeth firmly in place. Whereas the incisors generally have one root only, the larger molars have up to four. The roots supply the tooth with nutrients, blood and lymphatic fluid to keep it healthy and alive.

Tooth structure: the visible part of the tooth 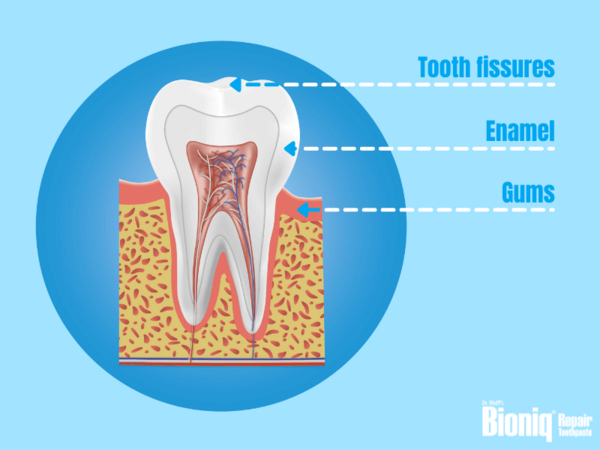 The gums cover the neck of the tooth and protect the underlying parts of the tooth and jaw from the ingress of bacteria. Healthy gums are pale pink and firm to the touch. Signs of gum inflammation (gingivitis) can be redness, swelling and bleeding of the gums.

Enamel forms the outermost layer of the tooth structure and encases the crown. Enamel is the hardest substance in the human body and is almost entirely composed of the mineral hydroxyapatite. Daily chewing and various other factors can form microscopically small defects in the enamel over time, which means the underlying layers are no longer optimally protected.

The small grooves and depressions on the molars are called defects. Although these help when chewing up foods, they are also highly prone to cavities. As defects can be up to 1 mm deep and difficult to reach, plaque can easily form and remain in these areas. As a consequence, so-called fissure cavities frequently occur.

Inner structure of the tooth 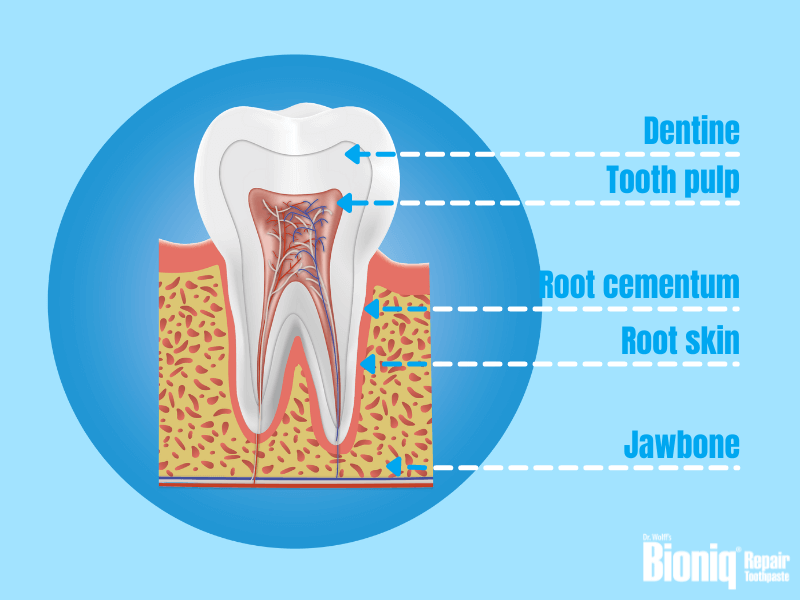 The dentine lies below the enamel. It is the second hardest substance in the human body and around two thirds of it are hydroxyapatite. Unlike enamel, which cannot be reproduced by the body, it is made continuously throughout our lives. Fine nerve fibres run through the dentine, so-called dentinal tubules or dentinal channels. If the enamel is damaged and the dentinal tubules exposed, external irritants are transmitted via this route into the tooth interior, which often manifests as sensitive teeth.

The tooth pulp is surrounded by the hard substance of the tooth and a space known as the pulp cavity or chamber. It is a soft, gelatinous connective tissue, consisting of blood vessels, lymph fluid and nerve fibres, which is why it is often incorrectly referred to as the tooth nerve. The enamel extends as far as the root canals, where nerves and blood vessels enter and exit. Inflammation of this sensitive area (pulpitis) is usually caused by untreated cavities. The symptoms are extremely bad toothache and sensitivity to temperature and pressure.

The root cementum is part of the periodontium (the tooth's supporting structure) and surrounds the root and the neck of the tooth. As well as fibres, tissue and water, it comprises up to 65% hydroxyapatite, making the root cementum similar to bone. One of its functions is to anchor what are known as Sharpey's fibres. These stretchy fibres ensure that the periodontium (the tissues supporting a tooth) is flexible rather than immobile. The pressure generated by chewing is cushioned by these fibres.

The upper jaw (Maxilla) is connected to the lower jaw (Mandibula) by a joint that enables the mouth to open and close and thus permits the chewing and grinding of food. The teeth are firmly anchored within a socket (alveolus) in the jawbone. A common reason for loose teeth is inflammation of the tooth socket (periodontitis). This is bacterial inflammation where the body's own immune defence system produces bone-destroying cells (osteoclasts). In the worst case, periodontitis can therefore also lead to loss of the teeth. 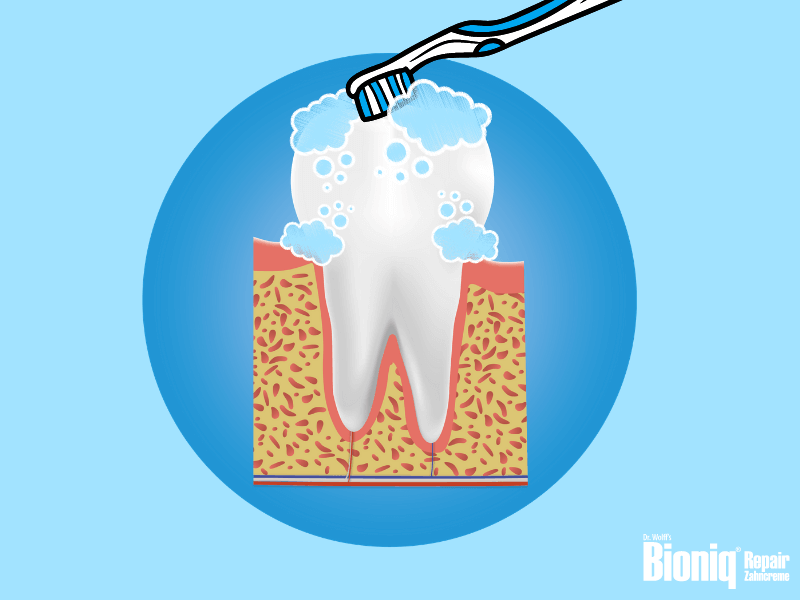 Brushing is one of the most effective methods of maintaining oral health and supporting the long life of the teeth. Daily brushing is focused primarily on the visible areas of the teeth: the enamel, fissures, the interdental spaces and gums, in particular the gum line.

The objective is to remove food remains and bacterial deposits known as plaque. This protects the teeth and gums from attacks by microorganisms and prevents the formation of cavities or gingivitis.

Bacteria collect easily on the surface of the teeth and along the gingival margin (edge of the gum), feeding on the remains of food and sugar and producing acids as a result. Acids demineralise the teeth and dissolve the crystalline components in the enamel. A diet which is rich in sugary and acidic foods also promotes demineralisation.

As a consequence, microscopically small defects appear in the enamel, to which bacteria can adhere more easily, favouring the development of cavities. Furthermore, other irritants can also be transmitted to the sensitive inner layers of the teeth via the tiny defects in the enamel. Very often, these defects are experienced as sensitive teeth when hot, cold, sour or sweet foods and drinks are consumed.

With daily use, toothpastes containing biomimetic hydroxyapatite, better known as artificial enamel, seal the microscopic cracks, thus repairing the enamel surface. The teeth then feel smoother and it becomes harder for bacteria to adhere to the surface. As a result:

Despite good oral hygiene, damage to the teeth cannot always be avoided. When damage occurs, dental surgery is necessary to restore the structure of the tooth. There are not only cosmetic reasons for filling the holes caused by cavities or replacing missing teeth. The various techniques also help to keep the set of teeth healthy as a whole. So what are the modern tooth restoration methods? 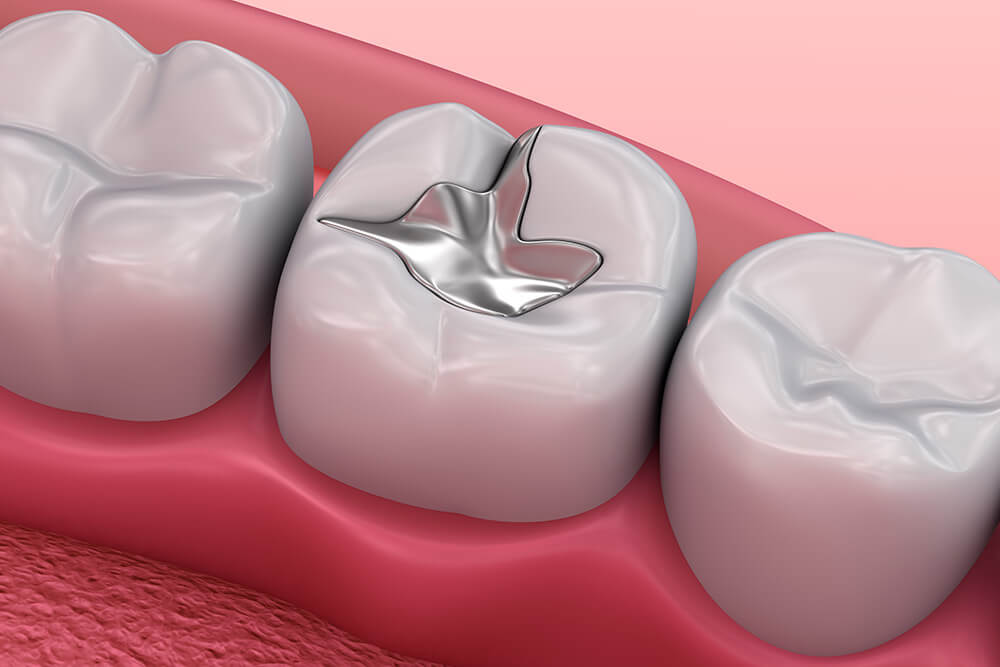 For purely superficial damage, a filling is often used to repair the tooth. This method is generally used to fill holes caused by cavities where the root has not been affected, or where a small piece of the tooth has broken off. Different materials are available which can be used for a filling:

An inlay or onlay refers to a filling which is made individually in the laboratory. They are used when there are still sufficient parts of the natural tooth left in place. Whilst an inlay replaces only a small part of the tooth, an onlay usually covers the entire masticatory surface of a molar.

Both inlays and onlays are secured using an adhesive, whereas classic fillings are placed straight into the mouth, then cured. They are usually also made of ceramic or, less often, precious metals such as gold or titanium.

Bonding is a comparatively new procedure of restoring a tooth and can be used in particular for the optical correction of healthy teeth. A plastic or synthetic resin is modelled on the tooth.

Bonding can conceal smaller dental defects, gaps, unattractive tooth shapes or discoloured spots and streaks. Front teeth which have broken off or which have become shorter as a result of tooth grinding can also be repaired using the bonding technique. However, bonding is generally viewed as a purely cosmetic procedure, hence the costs are not covered by health insurers.

If a tooth is severely damaged, the classic crown, which protects and shields the natural tooth, is very often used. The aim is to retain the natural tooth despite the serious damage. For a tooth to be restored by a crown, the root needs to be intact and undamaged.

A distinction is drawn between partial crowns, which cover part of the tooth only, and full crowns, which cover the entire tooth. First the dentist takes an impression, which the laboratory uses to make a custom-fit crown. Using cement or a synthetic bond, this is attached to the tooth, which has already been filed down by the dentist. Metal, ceramic or plastic are all suitable materials. 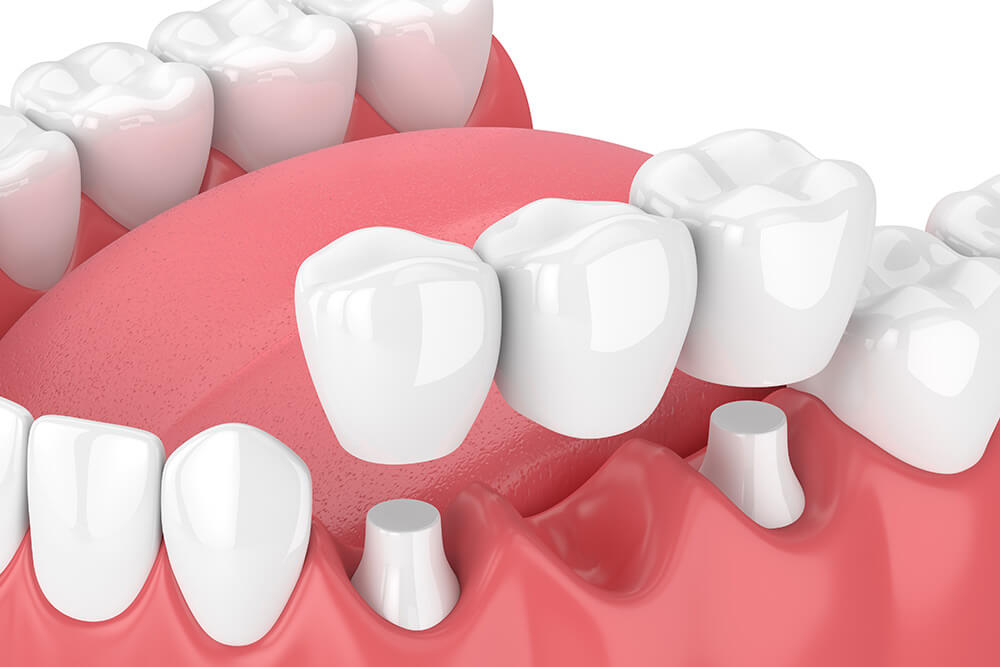 If a tooth is missing, a bridge can close the gap. It is secured to the adjacent teeth, which will need to be filed down and crowned. A bridge is only possible if the adjacent teeth are healthy and are not crooked, e.g. they are not already tilting into the gap. Bridges are generally made of gold, plastic or metal.

An implant is complex surgery and as a general rule, needs two to six months to heal within the jaw. The major advantage of a bridge is that the adjacent teeth do not need to be filed down or crowned. 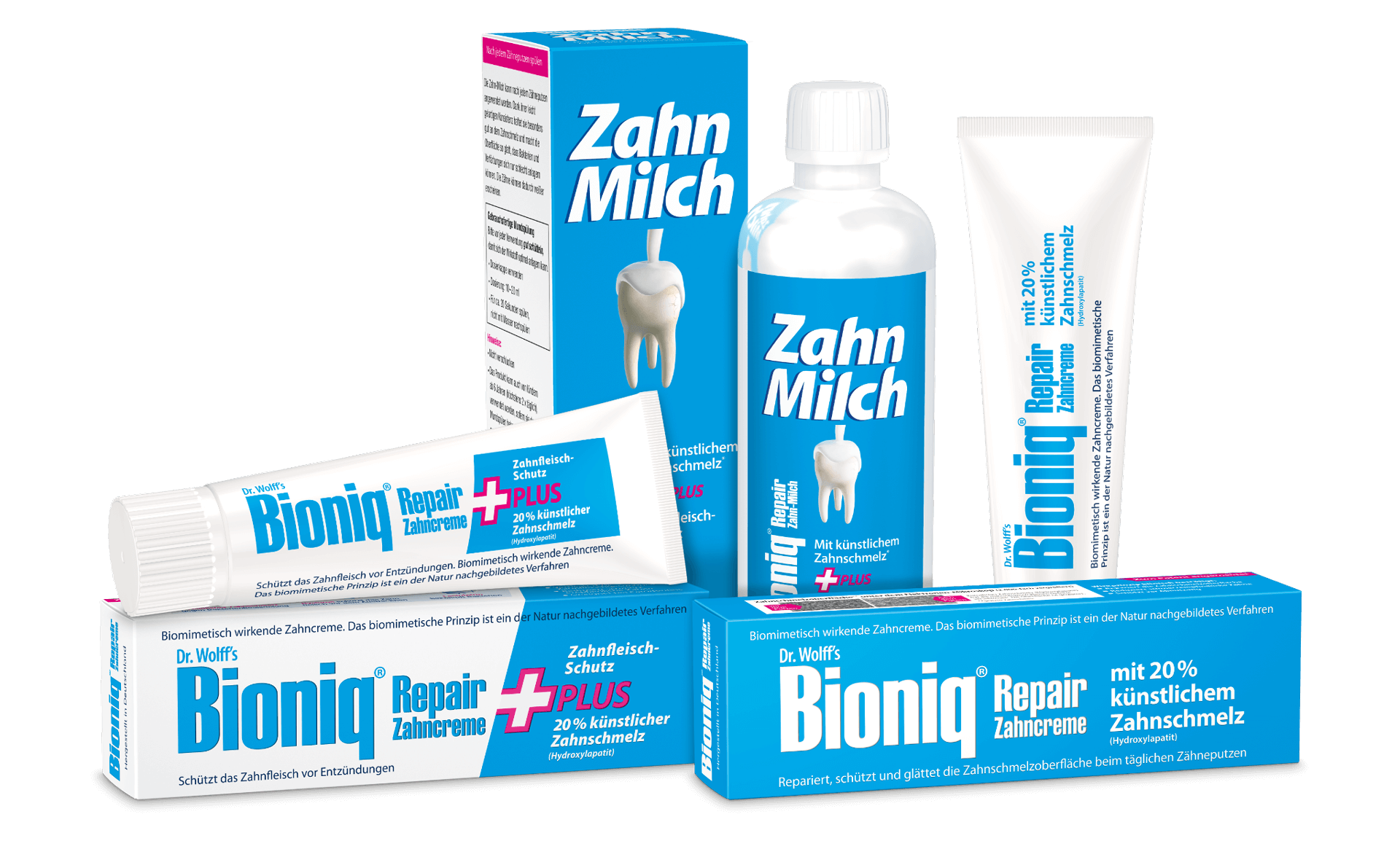 The methods and materials that can be used by dental medicine to repair and rebuild damaged teeth today vary widely and can be individually customised. The dentist will also explain which options are suitable for restoring the tooth.

But even implants and other restorations have to be cleaned and maintained. For this reason, all Bioniq® Repair products have a gentle formulation and can also be used on implants as well as fixed or removable dentures. They contain mild cleaning ingredients and gentle abrasives which will not damage implants, crowns, fillings or veneers.